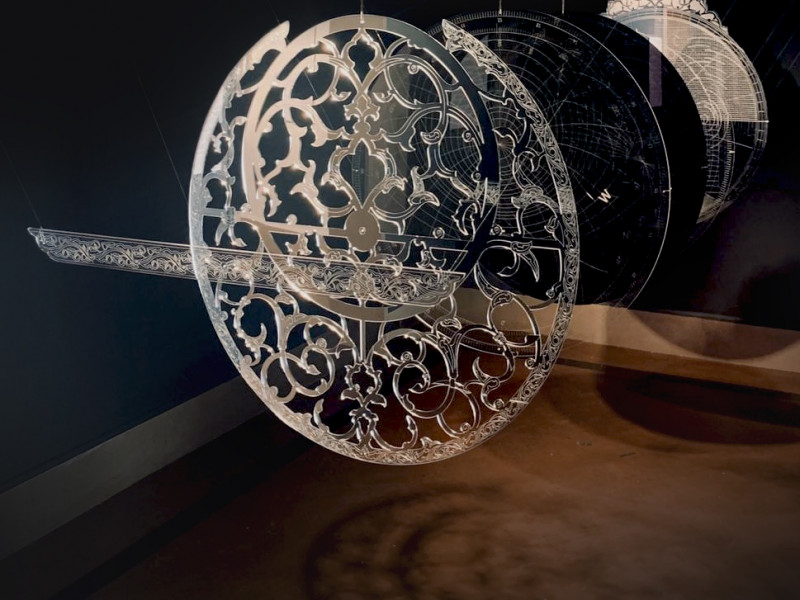 Sara Choudhrey is a London-based artist and researcher, using an investigative process to explore themes of space and place through shapes and pattern.

Sara’s practice involves the construction and application of patterns using a variety of media, where geometry and natural forms become reference points to site-specific locations around the world. Sara is interested in human engagement with these spaces, both natural and man-made, and considers their impact on each other beyond a specific time and place. Pursuing the concept of continuity, Sara has conducted practice-led research on visual culture from medieval Spain and Portugal, Mughal era sites in Pakistan and Islamic art in the British Arts & Crafts Movement.

Siraat presents a deconstruction of astrolabes found in museum collections across the globe. There is a particular focus on the structural form and geometry of astrolabes produced by 4 generations of a family based in the 17th century Mughal workshops of the walled city of Lahore, Pakistan. This reference becomes a point of literal and conceptual departure, relating to the artist’s Pakistani heritage and themes of post-colonial transit of objects and persons.

The rete, the top-most plate features biomorphic motifs inspired by plant-life, entwining like vines to convey the many journeys traversed by beings above and below, on land, sea and in the skies.

Also present is a stereographic projection of the skies above Southampton, returning the visitor to their present space and the immediate, ongoing, timeline in which they are situated.

A further plate is engraved with snippets in Urdu presenting raw emotions, dark and light humour through the migration stories of the artist’s parents.

Finally, there is the mater (Latin for mother, ‘Umm’ in Arabic). Coupled with its decorative hanging (known as a throne), this completes the structure as a seat to hold all components together.