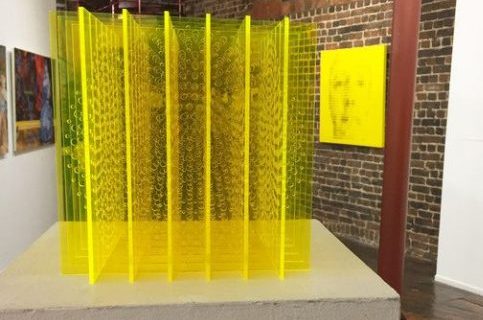 Ciaran started painting back in 1998 before moving his hand to public installations after gaining a Diploma in Fine Art from Chelsea.

“I had previously worked creating infographics for various media groups. So when I started a Graduate Diploma in Fine Art at Chelsea last year I used that graphics background and my Illustrator skills to explore an interest in grids, negative space and modularity. I discovered Perspex there and, especially with its fluorescent qualities, thought it would lend itself to creating work which exists somewhere between design, sculpture and architecture.”

“I use materials and repeated patterns to escape art that has one fixed viewpoint. I’m interested in making the viewer see things that aren’t really there: something that their imagination creates from engagement with the spaces in and around the work.
So the holes cut from the Perspex – where there is nothing – cumulatively create an imagined solid form, which changes with the viewpoint. The viewer constructs their own narratives and understanding of the work and the surrounding spaces: something which is more engaging and therefore satisfying”